The Adventures of Tom Sawyer
(eBook) 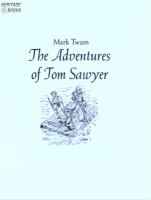 Other Editions and Formats